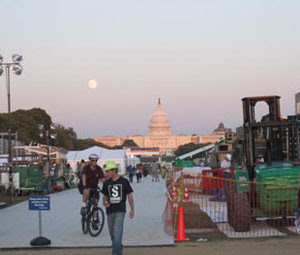 Solar Decathalon 2009 kicked off on the National Mall today. After receiving more than 40 student-generated proposals from universities in the U.S. and worldwide, the U.S. Department of Energy (DOE) narrowed the field down to 20 finalists that offered the most innovative, high-tech, high-efficiency, solar-powered homes. More than 800 students are competing this year. This is the fourth time the DOE has sponsored the biennial competition.

Each of the 20 student teams received $100,000 from the DOE but still had to raise some $400,000-500,000 to pay for the 800-square feet homes. The DOE spokesman said that by teaming up with a range of companies, the students were learning “real world experience” that will make them the “energy leaders of tomorrow.” Now in its fourth-generation, the Solar Decathalon is “pushing innovation and systems engineering.” Some homes include microgrids that can be run through an iPhone.

The homes will be judged by a team of architects, engineers, systems engineers, lighting specialists, and communications specialists on the overall architecture, engineering, comfort, marketability, appliances, lighting, and other aspects. The DOE said that not only must the homes be aesthetically appealing, but “they must also work.” Using only solar power, the homes must heat 15 gallons of water to 150 degrees twice a day; run all appliances; heat and cool the homes; and maintain temperatures of 72-76 degrees with 40-60 percent relative humidity. The judges have also added a home entertainment component. TVs, powered by solar energy, must be able to run for six hours per day. Additionally, six team members must live, eat, work within the homes from 10:00 AM to 6:00 PM every day during the competition.

The homes are being wired by local D.C. energy provider, Pepco, which has connected the homes to the central energy grid. Zero net homes will get 100 points at the end of 10 days but will receive an extra 50 bonus points if they return surplus to the grid, creating an additional incentive for energy-efficiency. The DOE says, “Solar is here to stay, and these homes prove that it works.” What the contest will prove is what technologies work best.

A number of student homes included integrated systems with landscape elements at their core: 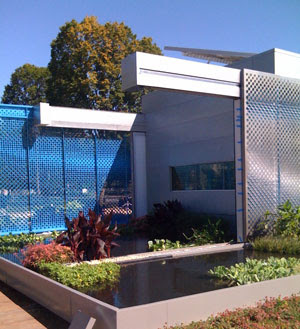 Ben Johnson, ASLA, professor of Landscape Architecture, Virgina Tech, said Lumenhaus’ site and landscape features were designed to contribute to the home enterprise and assist the solar-powered functions. Lumenhaus is “low-energy and high green,” said Johnson. Instead of a green roof on top of the home (which Johnson said the team decided not to use because of height restrictions), there are two types of green roofs that form terraces around the site. The green roof terraces are used for water treatment and lowering the home’s carbon footprint.

Johnson said recent research his department is conducting points to a fascinating number: 400-square feet of dense groundcover with a density of 32 leaves per square inch can sequester the C02 output of one person. Using these calculations, the Lumenhaus team determined the amount of plants needed for the site. For one terrace, the landscape architecture students involved in the project used sedum, which “sequesters carbon and doesn’t give it up, unlike other seasonal plants that dump their carbon during their lifecycle.” Additionally, the green roof terraces assist in solar absorption.

To assist with greywater mitigation, water output from the home’s sinks, dishwasher, washing machine, and other appliances, are infiltrated through the terraces and ponds in an integrated manner. Grey water is also used to water the green-roof terraces.  “Theoretically, you can drink it,” Johnson added. Unfortunately, Johnson noted, it’s not allowed. The hydroponics help create the site dynamic but also solve the greywater problems.

Virginia Tech started on this project more than two years ago. “Landscape architecture students were involved from the early concept phase.” Virginia Tech won the competition in 2005 so wanted to “up the ante.” To do this, Johnson said, they needed an interdisciplinary design team that included electrical, computer, and structural engineers, architects, and landscape architects. Johnson noted that the landscape architect was the “lead on site,” while the architect was the lead during development. Johnson added that the site development / landscape component of the Solar Decathalon had improved dramatically from four years ago. The team thought siting the home in a landscape would also help them win marketability points.

The total project budget was around $600,000. SemperGreen UK and LiveRoofprovided elements of the green roof terraces, along with Oscar Warmerdam.