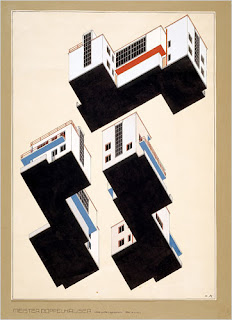 BERLIN — It wasn’t a happy ending. Once celebrated as Europe’s leading art and design school, by early 1933 the Bauhaus was reduced to camping in a hastily converted telephone factory on the outskirts of Berlin and subsisting on handouts from its director, the architect Ludwig Mies van der Rohe. Denouncing it as “un-German,” the newly elected Nazi government forced the school to close.

The Bauhaus has now returned to Berlin in very different circumstances. Some 1,000 examples of the work of its students and teachers are exhibited in “Bauhaus: A Conceptual Model,” which opened last week in the Martin-Gropius-Bau exhibition hall as the biggest-ever Bauhaus retrospective. The location is doubly significant, not only because its architect (and namesake) was a great-uncle of Walter Gropius, the Bauhaus’s founding director, but because of its geography. The building stands beside what were once the headquarters of the Gestapo, the Nazi’s secret police force, and the Berlin Wall that divided the city — and Germany — for decades.


As the Bauhaus’s history is steeped in German politics, it seems apt that it should be welcomed back to Berlin with such aplomb. The school opened in 1919, the year that the Weimar Republic introduced democracy to Germany, and ended in 1933 when the Nazis seized power. The remnants of the Bauhaus were then divided between three archives: two in its first homes of Weimar and Dessau, on the Communist side of the Iron Curtain, and a third on the other side in West Berlin.


This new retrospective marks both the 20th anniversary of the fall of the Berlin Wall and the Bauhaus’s 90th birthday. But being big doesn’t always augur well for exhibitions, especially when they are burdened by so much political baggage. Nor does it help that there have been so many other shows about the Bauhaus over the years, not to mention essays and books. Does this one say anything new?


Luckily it does. The Berlin exhibition, which was organized collaboratively by the three Bauhaus archives and is to open at the Museum of Modern Art in New York in November, combines famous Bauhaus mementos — from Marcel Breuer’s metal furniture, to Herbert Bayer’s graphics and the record-breaking Marianne Brandt teapot that sold for $361,000 at Sotheby’s — with some inspired surprises.


“Many people have a clear idea of what they think the Bauhaus represented, but that’s only part of the story,” said Annemarie Jaeggi, director of the Bauhaus Archive in Berlin. “We’re trying to show that it adopted different ideas and different approaches at different times.”


The (not so) “clear idea” of the Bauhaus belongs to the period from 1926 to 1928, when it moved into a brand new bespoke building designed by Gropius in Dessau. Among its teachers were some of the greatest artists and designers of the 20th century. Josef Albers, Wassily Kandinsky and Paul Klee taught art there. Bayer was responsible for graphics; Breuer for furniture; Laszlo Moholy-Nagy for product design; Oskar Schlemmer for performance; Gunta Stölzl for textiles; and Gropius lectured on architecture. His glacially elegant building filled with Breuer’s gleaming glass and metal furniture created an indelible impression of the “Bauhaus style” that, for the general public, swiftly became inseparable from the “modern style.”


Seductive though the image of the dazzlingly technocratic Bauhaus-Dessau is, it is only one chapter of the school’s story, as Dr. Jaeggi points out. The Bauhaus’s early years in Weimar were clouded by a power struggle between Gropius and Johannes Itten, a charismatic member of the then-fashionable Mazdaznan sect, which favored an instinctive, spiritual approach to creativity. The school’s first manifesto was illustrated by Lyonel Feininger’s woodcut of an ancient cathedral, and much of the students’ work was primitive in style. A highlight of the Berlin show is the rough-hewn wooden African Chair made by Breuer in 1921 with an artisanal seat woven by Stölzl. Lovers at the time, they were both students at the Bauhaus in Weimar, and teachers in Dessau.

It was only after Itten’s departure and the arrival of his successor, Moholy-Nagy, in 1923 that the school reinvented itself as a modernist hothouse. Fired by Moholy-Nagy’s zest for Constructivism, the staff adopted “Art and Technology: A New Unity” as their new slogan, and planned the move to Dessau. Gropius resigned after two years there, and the Berlin retrospective shows how the next director, the Communist architect Hannes Meyer, encouraged the students to adopt a more utilitarian approach by designing for the masses. Metal and glass was replaced by plywood in the furniture workshops, and the slogan changed to “Popular needs in place of luxury.”

Two years later, Meyer was succeeded by Mies. Despite spending most of his directorship embroiled in political rows with the local Nazis, first in Dessau and then Berlin, he instilled the school with his vision of “model architecture.” The exhibition ends with a 1932 montage by a student, Iwao Yamawaki, showing the Nazis trampling over the upturned Bauhaus building.
After the school closed in 1933, many Bauhäuslers fled from Germany, and the battle to write the history of the Bauhaus began. Gropius had the upper hand. As a Harvard professor, he taught his version of events to several generations of American architects, and disseminated it more widely through the 1938 Bauhaus exhibition at the Museum of Modern Art. The colleagues who had followed him to influential teaching jobs in the United States did the same: Breuer at Harvard; Albers at Black Mountain College then Yale; Mies at the Illinois Institute of Technology; and Moholy-Nagy at the New Bauhaus in Chicago.


Those who stayed in Europe fared less well. Many Bauhäuslers died there during World War II, or soon afterward. The ones who, like Brandt and Meyer, ended up in the Soviet bloc suffered years of repression when their Bauhaus ideals were condemned as “decadent.” By the late 1960s, when East Germany and other Communist countries were starting to reassess the Bauhaus, most of them were retired or dead. They did not have the chance to tell their stories, which is why Gropius’s account has proved so enduring, at least until now.