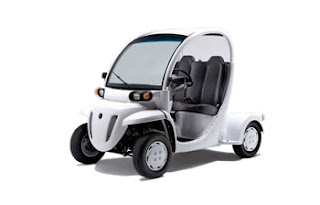 BLACKSBURG, Va., November 17, 2008 -- Students designing and constructing a solar house for the U.S. Department of Energy's Solar Decathlon competition are raising funds for their project by raffling an electric car.
The car is a two-seat GEM e2 produced by Dailmer-Chrysler. It is street legal and, because it uses no gas, costs about $60 per year to operate. The GEM e2 produces no emissions and can be charged on any regular household outlet. Tickets cost $10 each; only 2,000 will be sold.
The raffle tickets may be purchased with cash or checks, and are available in 202 Cowgill Hall during business hours; by contacting Allison Ransom, Solar Decathlon team member; and at the following locations and times:
Nov. 21, 7-10 p.m., at Big Al’s in downtown Blacksburg;
Nov. 22, 3-8 p.m., at Big Al’s in downtown Blacksburg;
Nov. 28, 7-10 p.m., at Big Al’s in downtown Blacksburg; and
Nov. 29, 3-8 p.m., at Big Al’s in downtown Blacksburg.
All proceeds will support the team’s Solar Decathlon project. The Solar Decathlon involves 20 international colleges and universities from around the world competing to design, build, and operate a solar-powered house. In October 2009, the houses will be displayed on the National Mall in Washington D.C., and will be toured by the public. Thousands come to event to view the creative and innovative solar homes designed by tomorrow’s architecture professionals.
This Solar Decathlon entry will be Virginia Tech’s third. In 2005, the Virginia Tech Solar Decathlon team won first place in Best Architecture, Best Dwelling, Best Daylight, and tied for first place in Best Electric Light; the team placed fourth in the overall competition. The 2005 solar house is currently on exhibition at the Science Museum of Virginia in Richmond, Va.
The raffle winner will be notified by phone and e-mail. The winner will be announced on the Virginia Tech News website and on the Virginia Tech Solar Decathlon team’s website. If an electric car is not your speed, but you’d like to make a donation to the team’s project, visit the team’s website. The raffle is being conducted through the American Institute of Architecture Students.
http://www.vtnews.vt.edu/story.php?relyear=2008&itemno=743
Posted by csb at 7:17 AM